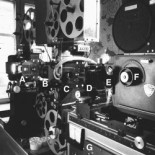 Progress Not Perfection: The Work of Ariel Schudson

To Hypertext and Beyond: Vannevar Bush’s Additions to Information Science 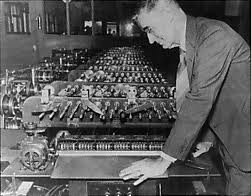 This piece was written for IS 260: Information Structures, taught by Professor Gregory Leazer as a requirement for the Moving Image Archive Studies Program at UCLA during the Fall of 2011. Professor Leazer’s course examined a variety of ways and models of information structures and how they were at play historically and currently in the information science world. Within this class, we looked into all manner of cataloging, descriptive work and the development of the information systems that currently inform our digital and analogue worlds. My interests became quite intent on the manner in which we, as humans, were able to interact with the machinations of each system and work together in order to create more interactive systems, such as folksomies and the usefulness of controlled or uncontrolled vocabularies in certain informational structures. This piece on the memex was the initial writing that inspired me to do so.

While the hypertext of Vannevar Bush might be his 1945 Atlantic Monthly article, the unspoken associative indexing of this influential figure is made up of more well-known and used information bundles than one might initially think. Due to the fact that Bush thought on a larger conceptual level and not simply on a small, invention-based one, this allowed his ideas to span the decades and wind up where we are now: discussing his writings and their relationship to today’s information providing mechanisms.

Within Bush’s seminal piece, “As We May Think,” he discusses inventing a machine by the name of memex and all the various things that it would and could be good for. Through his hypothetical narrative for this machine, he details the various and assorted informational systems that would eventually become assets due to the mechanism’s innate operational features. He states that, as the memex progresses and it becomes clear what the capacities of the machine are, the ways that it can be accessed by the user also progress. In his originating argument, he lays out what the memex is and what it, as a machine, will have the capabilities to do. Essentially, he argues, this machine will have the means for what we today know as hypertext. Bush called it “associative indexing” but what he really is noting is an apparatus that has the capability to link two (or more) subjects together in the way that the mind would link them together. Bush does recognize that there will never be a machine that has the same creative sense of play or linkage that the human brain does, but his conception of the memex and the far-reaching aspects of it, as he notes, might come close and may even add something new. He writes,”Man cannot hope fully to duplicate this mental process artificially, but he certainly ought to be able to learn from it. In minor ways he may even improve, for his records have relative permanency.”1

Indeed, the items that sprang from Vannevar Bush’s memex plans became more concrete and did turn into more permanent records, although that permanence is of the digital realm. The memex plans gave birth to things such as wikis, iTunes, or even facebook. The digital worlds that can call memex their godparent are vast and many, primarily due to Bush’s ideas of informational linking. The concept of being able to link one idea or topic to another mimics the human brain so ideally that it can (and did) sponsor an inordinate number of computer programs that only got more advanced as the digital world also advanced. While Bush himself simply talked about research and little screens and codes and writing notes that would tie one item to another, other people like Tim Berners-Lee (creator of the World Wide Web) and Ward Cunningham (inventor of the first wiki software) took that to the next stage and developed whole other technologies. Pure and simple, the World Wide Web would likely not exist were it not to have been for the ideas set forth by Vannevar Bush.

It is no new concept that we connect ideas in our minds on a daily basis, but Bush’s associative indexing, his hypertexting (later given that title by Ted Nelson), was an idea that was so new and genuinely groundbreaking that it reached people in all areas of study. It hit folks in librarianship, it hit folks in science, and it hit folks in the medical world. This was an interesting possibility for the academic world that might assist people in ways that were based upon their own natural impulses. What a notion!

Vannevar Bush’s discussion on associative indexing and how it might work through devices such as the memex is made more salient by looking at the current machinations that we use on a regular basis. While it may seem obvious just by mentioning the term “hypertext” that Bush’s work was a prescient study of what the digital world was going to involve, how did we know that he was going to actually foresee the entirety of Wikipedia and the depths of what that actually is? It is essential to note that while contemplating the different things that would be involved in the “hypertext” linking of the memex, Bush actually states that “Wholly new forms of encyclopedias will appear, ready-made with a mesh of associative trails running through them, ready to be dropped into the memex and there amplified.”2

Within this one sentence we are shown the breadth of his foreknowledge. It is not necessarily the specificity of the memex machine that he is discussing. He might have thought so, but, realistically, it was the process Vannevar Bush was discussing not the product. As the world progressed, and the World Wide Web appeared and the “wholly new forms of encyclopedia” began to appear, it was by associative indexing, not through the memex.

The beauty of a Wikipedia entry is that you get all the information that you were searching for in a neatly organized fashion, just like you would in any encyclopedia. But youget a bonus: hypertext links within the entry and more at the very end of the article. Not only are you able to jump to other articles about the same subject, allowing you to pursue your research further on a completely separate site, but the internal links (the hypertext) within the article itself permit you to follow the Vannevar Bush memex way: build a thick trail of information that will either stay topic-consistent or lead you to start building an entirely new trail.

The idea of a Wiki is like memex going to kindergarten: ideally, everyone learns to share, cooperate and to tell the truth in order to play on the same playground. Does this work out all the time? Not necessarily, but the intention is certainly there. Additionally, the fact that there are various voices there to either corroborate or deny the factuality of the content ends up becoming a method of certifying the entry. Wikis function based upon their hypertext-edness, but they also function based upon their capacity to be edited by a multiplicity of voices. Like Bush’s concept of the associated index, the Wiki also has broader reaches. It doesn’t begin and end at Wikipedia; a wiki is a database-type software that has properties that are not unlike some of the larger concepts that are mentioned within “As We May Think.” A wiki is designed to organize several kinds of information about a given item in one web location/site and strives to lend itself not only to the ideals of an associative indexing mind-set but also to the progressive ideology of multiple mind-sets weighing in and participating in the manner in which the website does the associating. Instead of that one person sitting at the memex machine, writing codes, making comments, trailblazing his informational way across the memex-verse, wikis present a space where multiple people can do that, even at the same time.

While these innovations are all well and good, Bush’s theories were far from perfect. It is essential to recognize the advancements that were made, however it is just as crucial to realize that associative indexing was not entirely a perfect concept. Vannevar Bush’s memex was based upon the workings of the human brain and memory. That, in and of itself, is problematic. The saying “we’re only human” comes from the reality that we, as human beings, are prone to error due to our very nature. More importantly, what one person may associate with something, another person may not. It is an unknown variant. This creates what may be the most essential problem for memex and associative indexing. Michael Buckland took note of this within his piece that he published in the Journal of the American Society for Information Science. He wrote,

Relevance judgments, however, are notoriously inconsistent, situational, and likely to change as one’s knowledge evolves. Since Bush’s trails were based, not on the contents of the document but on perceived relevance of documents to trails, any individual’s pattern of trails would be unlikely to be satisfactory for any other user…The trails, being based on one individual’s personal knowledge and perceptions of relevance, would be highly obsolescent. As a user’s knowledge increased, perceptions of relevance would change, and the trails would need to be remade. Any given pattern of trails would remain appropriate only so long as the user did not learn anything from the use of the Memex–or in any other way.3

It is critical here to note that it is Buckland’s decisive view of the individuated user that would prove to be most problematic for the memex. Had there been a multiplicity of users as there ended up being within the digital community just a few years later…it might have been a different story. While Buckland is also not infallible, his criticisms bring up strong points about needing to base trails (at least partially) on the documents themselves instead of the humans using them.

As we can see, Vannevar Bush’s work has produced both the positive and the negative. Overall, however, the Google search function and the reason that we can type in three divergent terms that give us the result we were hoping for is due to it being part of the lineage that started with associative indexing. The reason that we can find a restaurant to go to on Yelp is due to the commenting properties that were alluded to by Bush. Vannevar Bush’s legacy is far-reaching.

This piece was written for IS 260: Information Structures, taught by Professor Gregory Leazer as a requirement for the Moving Image Archive Studies Program at UCLA during the Fall of 2011